We all know that birds sing. Wherever you go one will serenade you; chirping or whistling, they each have their song, and we listen intently; they are the rock-stars to each song, like Freddy Mercury, Adam Levine, Stevie Nicks or even Michael Jackson. The aforementioned singers all however have a band, or some form of accompaniment, and that is so often overlooked. When we are talking about birds their accompaniment may be crashing waves, or rustling leaves, but without these noises the birds’ songs will become nothing more than a memory. 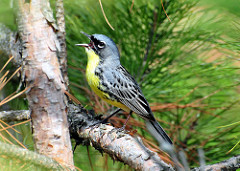 Take for example the Kirtland’s Warbler. If you are a birder, or from Michigan then you already are familiar with this rock-star, even if you have never heard it’s melodies. This species has been on the verge of extinction for many years, largely because its accompaniment; the forest, wasn’t quite in tune. The Kirtland’s Warbler not only requires forest to live, they require a very specific type of forest: Jack pine forests. Even more specifically they require young Jack pine trees. The birds use young Jack Pine trees to nest, and it is that requirement that puzzled us for so many years and nearly wiped the species out.

Jack pine trees require fire and disturbances for their seeds to germinate, or start to grow. Eventually we began suppressing fires and harvested fewer trees; the combination meant that each year the warblers had fewer and fewer trees to nest in, meaning that the population began to decline. In the 1970’s there were only about 200 singing males, and the forests began to grow quieter and quieter. It was clear something had to be done; there had to be a comeback tour. Land was set aside and managed so that young jack pines would be available to the warblers. With proper management and land the Warblers numbers began to increase and their music is becoming more common. Now estimates show over 4000 individuals in the warblers’ population.

The Kirtland’s warbler is a classic example of how an organism, in this case a bird, can be dependent on its environment; the warbler needed the young jack pine forest in order to survive. For many of us organisms like birds and mammals are what we care to see, they are the stars, but we need to remember the things that are allowing them to live: the ecosystem. So the next time you go for a walk through the forest, take a minute to appreciate everything that you are seeing. The trees and flowers around you may not take flight or sing to you, but they are beautiful and essential for what we are often dying to see.

11/3/22
Getting to Know Our ForestHers: Edna Williams