Walnut Syrup: The Other Tree Syrup 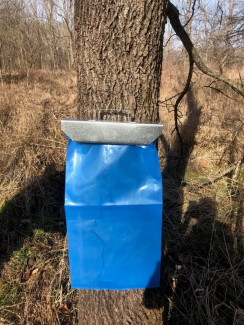 By Sarah Havens and Dakota Wagner

Nearly everyone is familiar with maple syrup, but have you heard about walnut syrup? Walnut syrup is every bit as delicious as maple, and in some parts of the US it is easier to find a walnut tree than it is a maple!

Traditionally, syrup has been made by tapping maple trees in late winter/early spring. Tapping the trees serves to collect sap as it flows from the roots to the crown of the tree for bud break. Starches are stored in the roots during the winter and are the energy source for spring development. In late winter/early spring these starches are converted to a sugar that is transported with a lot of water to the top of the tree.

The conversion of starch to sugar happens on days that the temperature is between 40 and 50 degree Fahrenheit. These are the optimal days for tapping trees and collecting the sap that contains the sugars. The sap also runs best on days that are above freezing, with daytime temperatures in the mid 40’s-50’s. Sap does not just run up to our taps but also down due to the temperature fluctuation. Once the day temperatures warm up and the overnight temperatures do not go below freezing, the starch will not convert to a sugar and the syrup produced is no longer sweet. Walnuts seem to have a similar pattern. In my personal walnut tapping experience, the walnuts have been flowing during lower day time temperatures while the maples have not. 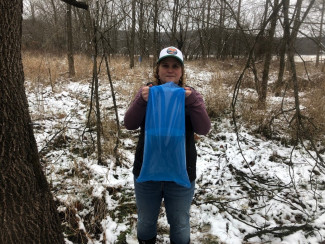 So what do you need to start syruping? I will show you my start-to-finish project that I am working on with walnut syrup.

Step 1: Install taps on trees. Taps are often referred to as spiles. There are two common sizes: 5/16 inch and 7/16 inch. Taps are installed by drilling a hole into the tree so that the tap can be tapped into the cambium of the tree. This is where the sap is flowing.

Step 2: There needs to be a collection system. This can consist of bags or buckets attached directly to the tap or a tubing system that carries sap to a collection container. In my project, I opted for plastic collection bags. They keep the sap clean and are fairly easy to attach.

Step 3: Collect the sap. The sap can be stored for a short time in a cool area (a few days) but it should be boiled down in a timely manner. The sap can sour if allowed to warm too much or sit for too long. You will also want to make sure you store sap in food-safe containers. I am collecting food-safe plastic buckets for transport from field to being boiled down. The sap is also strained prior to storage to remove any dirt. 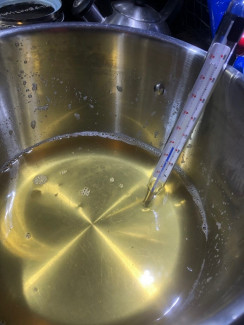 Step 4: It is time to boil your sap down to syrup. For walnut, the conversion is about 40 to 1, so 40 gallons of sap will become 1 gallon of syrup. The sugar content of the syrup should be 66-68%. This is deal for preserving and is just before crystallization. You can use a refractometer to measure sugar content. You can also use a candy thermometer and boil the sap down to 7 degrees above the boiling point of water (219 degrees Fahrenheit). Boil down is best done outside. For small amounts, a propane burner works well. If you are boiling down a lot of sap, a wood fire would be more cost-effective. In my project, I used a large stock pot over a propane burner to boil down until it reached about 2 inches from the bottom. I then finished boiling down on my stove inside so that I could look at the temperature and prevent scorching. After you complete boil down, the syrup should be strained using cheesecloth, wool or felt. There are also syrup filters for this purpose available through suppliers.

Step 5: Enjoy your final product! Walnut syrup has a very pleasant butterscotch taste that I enjoyed! My final boil down was about 48 cups (3 gallons) of sap into 1.25 cups of syrup. In order to keep your syrup for an extended period, it does need to be canned to prevent spoilage.

In western North Carolina, students at Warren Wilson College have been tapping black walnut trees for several years – some years more successful than others.

The current setup is similar to what’s happening in Missouri. Sap is collected from a small two- to three-acre stand on a moderately inclined south-facing slope. Rather than using individual buckets, students use a tubing collection system that leverages the slope and relies on gravity to carry the flowing sap down the hill to the awaiting buckets. The sap is then transferred from these large barrels into smaller buckets using a reverse osmosis filter system. In this case, however, the purified water is the byproduct and the concentrated sugary sap is what is kept.

Since the sapping season can be unpredictable this far south, the concentrated sap is frozen until enough has been collected to boil down into syrup. At the end of the season, the sap is boiled down using an evaporator. Basically, it’s like babysitting but the kid you are watching is actually sweet-smelling caramel-y tree water that could burn if you leave it for too long. If there isn’t enough sap to continue using the evaporator safely, then finishing off the syrup over the stove is also a great choice. The final sugar concentration should be around 66 percent.

And then when the season is over, the stand is used as pasture for sheep, who happily keep the understory growth at bay! 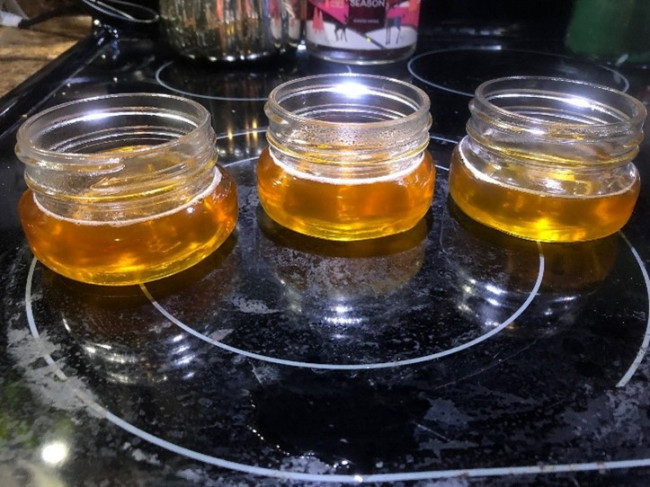