Will Winter Cold Save us from Emerald Ash Borer?

Emerald ash borer is now established in Minnesota and poses a serious threat to our huge population of ash trees. As we shiver through this week’s “polar vortex fueled arctic superfront,” some have taken comfort from recent research suggesting that the cold may wipe out up to 80% of emerald ash borer larvae in Minnesota. A recent report by Rob Venette and Mark Abrahamson predicted that “when larvae reach -17.8°C (0°F), 5% will die; at -23°C (-10°F), 34% will die; at -29°C (-20°F), 79% will die; and at -34°C (-30°F), 98% will die.”  Well, air temps were colder than -20°F for several hours this week across much of Minnesota. Based on these numbers, it seems likely that the prolonged cold this week did in a lot of EAB larvae.

This is good news. As UMN Extension’s lead EAB guy Jeff Hahn reminded me this morning, EAB is largely a numbers game. The bugs can be munching away under the bark for several years before trees start dying in large numbers. But when the cumulative effects of repeated years of damage and ever-increasing EAB population density reach a threshold, a lot of trees can die quickly.

A big reduction in EAB population density could move us back from that “tipping point,” buying a few years more time. But…

Why EAB is here to stay:
This arctic superfront is the exception, not the norm. The average number of nights below -10°F is on a steady decline in recent years, meaning that EAB-killing cold will be less common in the future: 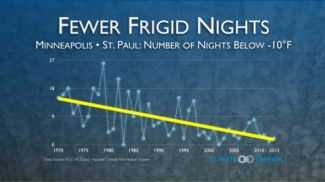 Even if we lose a lot of EAB this winter, we will not lose them all. Many will survive, either because they are fortunate enough to be in a relatively warm spot (temperature can vary fairly widely across the landscape based on wind exposure, aspect, topographic position, and so on) or because they are more cold hardy than most. These survivors will find each other and begin to rebuild the population. And as Lee Frelich points out, over the long term, cold events like this one could select for cold hardiness, increasing the population’s resilience to future cold events.

There has been some good news recently about the potential for newly introduced stingless wasps to control EAB populations. Will they help? Yes, and they may even be more cold tolerant than EAB. But the cold could knock their populations back as well.

An 80% reduction in EAB populations would be great.  It would buy some time for homeowners and woodland owners to prepare for EAB’s arrival. ButEAB is in Minnesota to stay. Our ash trees, which have no natural defenses against EAB, are likely to see extensive mortality both in cities and towns and across Minnesota’s 17 million acres of forest.

EAB has killed millions of trees in the United States since its introduction. Individual trees can be treated to resist EAB-induced mortality, but out in the woods the bugs, and tree mortality are harder to detect and likely to cause more widespread damage.

So what to do? First, and most importantly, do not move firewood. It’s not just EAB; firewood movement is the primary vector for new introductions of a number of damaging insects.

Homeowners do have individual-tree treatment options. But those treatments are impractical in the woods, sowoodland owners need to prepare differently for EAB. If you’re thinking about harvesting timber, maybe expand the sale a bit to take the ash with the other species. But leave about 50% of the canopy intact to avoid ponding that results in long-term loss of not just ash, but any tree cover. You won’t make much money from harvesting ash, but you may avoid a hazardous situation with a lot of standing dead trees in the future. Likewise, if you move ash to the front of your firewood harvesting queue, do it.

Sorry to rain on the EAB party. Now let’s get back to winter!

3/12/21
EmpowerU - Empowering Woodland Owners (and others)

2/9/21
Family woods work during the pandemic

7/1/19
Managing ash woodlands in the face of emerald ash borer: what are your options?

3/20/19
By Land and By Sea, new invasive species field guide

7/10/17
Forest recovery: a story of dedication, engagement and regeneration

5/15/17
How to Prioritize Invasive Species Management

5/2/16
Garlic Mustard Management: Making the World Better One Cup of Soup at a Time