On a chilly morning in January, I interviewed Fran Wunderlich, a Pennsylvania landowner whom I met in October at the Pennsylvania Women and Their Woods retreat. Fran and I enjoyed a long conversation about tax breaks, Marcellus shale, and the advice she has for fellow women woodland owners. 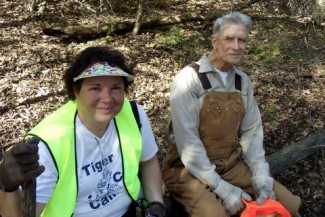 Fran and her husband Charles own land in Tioga County, Pennsylvania, and live in town about 4 miles away. They bought 153 acres in 1991, and back then Fran was plenty reluctant about the added burden of land management on her already busy life. With two young boys at home and little experience with rural property ownership, Fran said to her husband “Why don’t we leave farming to the farmers?” But it had long been his dream to own land, and his vision of their life as forest landowners won the day. Now, Fran is completely committed to rural life and the restoration of her forestland. Her favorite aspect of ownership is being able to hike a trail and spend time in nature anytime she wants. In 2001, the Wunderlichs bought an adjoining 33-acre parcel.

The land was originally part of a large tract that had probably been used for grazing cattle. Heirs to the tract sold parcels off over centuries of family ownership, until Fran and Charles purchased their 188 acres. There is still evidence of grazing on the property, including several fields they mow to keep invasive species at bay and to grow hay for nearby cattle operations.

In fact, Fran’s greatest triumph on her land has been the conversion of a field of multiflora rose, autumn olive, and other invasives to a beautiful pond and overlook. For the first several years of land ownership, the Wunderlichs spent their time digging a pond and removing invasives. They built a gazebo overlooking the pond where they watch pollinators enjoying the fruits of long, laborious days. Charles enjoys the task of mowing the acres around the pond. “It takes about twelve hours of mowing, but he loves it. He mows every day for a week, and in a few days it’s time to start mowing again,” she said. 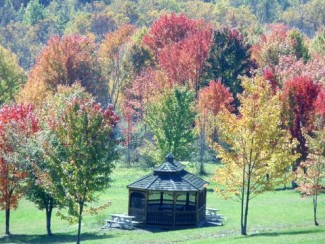 I asked Fran about the management plans they use to guide decision-making in their woods. They have two: a Forest Stewardship Plan written in 1998 (it’s now being updated) and a Conservation Stewardship Plan written in 2010. Their primary management objectives are to create and maintain wildlife habitat and to enjoy light recreational activities like hiking, one of Fran’s favorite things to do. Fran said they “essentially [want] to maintain the natural environment – maintain and improve it.”

The Conservation Stewardship Plan questionnaire has been especially helpful for keeping activities and goals organized and on schedule. “You look at 188 acres and think ‘What am I gonna do with it?’” Fran said. The Plan allows them to keep their mind on long-term objectives.

With their management plans, Fran and her husband participate in Clean and Green, a tax-abatement program that encourages landowners to keep parcels undeveloped and intact. Fran explains, “It gives you a tax break on real estate taxes. If you decide to build on it or sell it, you owe back taxes” for the seven most recent tax years. The Wunderlichs also receive cost-share assistance from the Conservation Stewardship Program to offset the cost of approved management activities they undertake.

Other than the hay they sell to local dairy farms, Fran and her husband receive revenue from gas and oil exploration – part of the Marcellus shale boom. Fran says working with the gas and oil companies has been their biggest challenge: “There’ve been some sad times for my husband and me. They do a lot of damage to forest and field.” Fran is saddened by the damage to the forest floor, but not necessarily angry. She says the gas company’s representatives did a great job avoiding features of the property she specifically pointed out to them like the bluebird trail, vernal pools, and trails. She thinks the real problem was a lack of knowledge about erosion paired with the wettest fall on record for much of Pennsylvania and the mid-Atlantic.

Fran wishes the equipment operators had had enough knowledge of the potential destruction to stop work before the damage occurred. Even with the incredibly wet conditions, “they were going to explore no matter what… we were in jeopardy of being thrown out of the CSP program” due to erosion. That’s when the local conservation officer stepped in. Because the Wunderlichs had been working with local service foresters for years, the county officer was able to go to bat for Fran and her husband, helping them stay in the CSP program and continue receiving cost share assistance, despite the damage to their land.

Fran is proud of her work toward another source of revenue – firewood. The creation of a CSP plan includes a marketing plan for the sale of a product. Fran points out, “You have to read the forms literally: it requires a marking plan, but it doesn’t require the sale itself.” Nevertheless, she thinks firewood may be a worthy venture in the future. Because of Emerald Ash Borer and the possibility of Asian Long-horned Beetle coming their way, firewood cannot be brought into Tioga County. Fran came up with the idea of selling firewood, researched and wrote the plan, and submitted it with her CSP application. She found a lot of resources to write the business plan at her local USDA service center. Fran said writing the plan wasn’t complicated, it just required a bit of research and was time-consuming but, “When you love your land, it’s worth it, and I think that’s true of a lot of government programs: you just have to be willing to put the time in and do something to protect land.”

I asked Fran what will happen to their land when she and her husband pass on. The land will pass to their two sons, both in their twenties, and she said, “We’ve been toying with the idea of a conservation easement, but haven’t don’t anything about it yet.” Fran’s older son would be interested in managing the property, but the other isn’t as involved.

Fran has gained a lot of land management expertise over the years, but she is most eager to share how she put in a pollinator field. Fran said, “I did a lot of research about it. My best advice is to research at the library and at county offices. I took a seminar on pollinator fields put on by the Xerces Society.” Fran suggests the Penn State University website. When I pressed her for specifics she said, “PSU Extension, the School of Forestry [sic School of Forest Resources]… oh, any Penn State website!”

In the future, Fran plans to extend her system of trails. She plans to take some advice she was given to “have a goal in mind for your trails, like you’re looking for something.” She’ll mark them with numbers and label them by destination: the vernal pool, the creek, the old oak tree, her land’s highest point, and others. 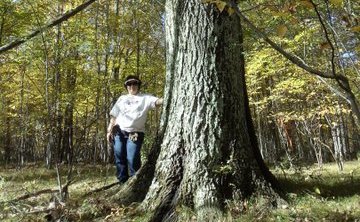 Finally, I asked Fran what advice she would give to another woman landowner: “I would tell her to get as much education as she can about taking care of her property so she doesn’t feel at a loss dealing with loggers and other land management people. Attend seminars, watch webinars, establish close relationships with neighbors, foresters, and county professionals – the people you’re going to work closely with.” Fran said, let them see you want to “be a mother to your land.”

7/20/12
A New "Practical Guide in Agroforestry for Landowners"