The Green Menance (EAB) is in Arkansas!

Fall is finally here in parts of the South!  Trees are beginning to change color, hunters are getting ready for the season, nights are finally getting cooler, and campers and homeowners are thinking about enjoying those nice, cool evenings with a fire in the fireplace or chimenea. But, those beautiful colors and evenings could be destroyed by a deadly pest that might be hiding in your firewood: the Emerald Ash Borer.

The Emerald Ash Borer, or EAB, is native to eastern Russia, northeastern China, Mongolia, Taiwan, Japan and Korea, where it occurs on several species of ash. So how did the Emerald Ash Borer get here?  It was probably imported into Michigan via infested ash wood crating or pallets at least 15–20 years ago.  There are millions of wood pallets and crates entering this country every year and pests hitch a ride to our shores. Recent research suggests that it was in Ohio and Michigan as early as the 1990s.  In 2002, people noticed increased death and decline in ash trees in the Southeastern Michigan area.  It was eventually attributed to EAB.  Despite quarantines and other efforts to contain the beetle, it spread rapidly.

Many of you in the Midwest and the East are already fighting this insect. There are other articles on this website devoted to the EAB.(read Angela Gupta's article here:http://www.womenowningwoodlands.net/content/emerald-ash-borer-what-it-why-do-i-care )

We thought that we were relatively safe here in Arkansas. EAB was found in Missouri in 2008 resulting in a statewide quarantine.  We, the forestry community, were confident that EAB would enter Arkansas from the north or through our river ports in central Arkansas. As time went by with no EAB found in monitoring traps in northern Arkansas, we felt pretty lucky.  Maybe, just maybe, we could remain EAB free for several more years. Those hopes were dashed this past July.  In the summer of 2014, EAB was confirmed in six counties in southwestern Arkansas. The beetle has been in these areas for a while based on the damage to ash trees. 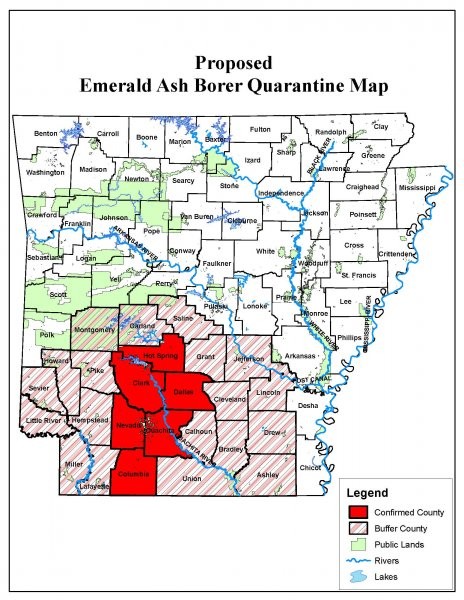 So how did we misjudge the EAB? We simply forgot how many campers, travel trailers, pickup trucks, and various other vehicles travel across the State to reach the excellent wildlife areas in south Arkansas.  Southwest Arkansas’ woodlands provide excellent habitat for whitetail deer and turkey. Traveling down the interstate on opening day is like watching a parade of orange-vested or camouflaged clothed hunters: the interstate is packed. One of these vehicles was giving the EAB a free ride.

How do we slow the spread?  The Arkansas State Plant Board and the Federal Animal, Plant, Health Inspection Service, or APHIS, worked closely with sister agencies and organizations to develop an emergency quarantine for most of Southern Arkansas. Twenty-five Arkansas counties are included in the quarantine to slow the spread of the Emerald Ash Borer. Quarantined items include firewood of all hardwood species, and the following ash items: nursery stock; green lumber with bark attached; other material living, dead, cut or fallen including logs, pulpwood, stumps, roots, branches, mulch and composted/un-composted chips (1 inch or greater).  Firewood is the only quarantined item that relates to all hardwood; all other quarantined items apply to ash only. Counties affected are Ashley, Bradley, Calhoun, Clark, Cleveland, Columbia, Dallas, Drew, Garland, Grant, Hempstead, Hot Spring, Howard, Jefferson, Lafayette, Lincoln, Little River, Miller, Montgomery, Nevada, Ouachita, Pike, Saline, Sevier and Union.

In addition to restrictions on the movement of all hardwood firewood out of the quarantined areas, the Arkansas Game and Fish Commission and the Federal Fish and Wildlife Service have banned the importation of firewood into all Wildlife Management Areas and Wildlife Refuges across the State.

The biggest challenge will be in educating hunters, landowners, and homeowners about the dangers of moving firewood out of the quarantine area. The other challenge will be to convince out-of-state visitors to leave their firewood at home.  Luckily, a national campaign led by The Nature Conservancy offers educational materials, PSA’s, and other information.  The Nature Conservancy’s “Don’t Move Firewood” campaign stresses to buy local, and buy it where you burn it.

Information about the risk of moving firewood can be found at www.dontmovefirewood.org.

Information about the EAB in Arkansas can be found at: http://www.uaex.edu/environment-nature/ar-invasives/default.aspx

11/7/12
Intergenerational Land Transfer: Were We Ready?