The Forest Unseen: A Year’s Watch in Nature (Penguin) by David George Haskell

David George Haskell’s previous book The Forest Unseen: A Year's Watch in Nature (Penguin) was a finalist for the 2013 Pulitzer Prize in General Nonfiction and won many awards. The Forest Unseen stresses the way we (humans) are in a relationship with the natural world and how that relationship has become skewed. Those of you who adore Aldo Leopold’s Sand County Almanac, as I do, will find a contemporary and compelling parallel in Haskell’s The Forest Unseen. It is a text grounded in reality that connects science to place, philosophy to life, and history to now. Haskell knows what he writes—he is a professor of biology and environmental studies at the University of the South and a Guggenheim Fellow. 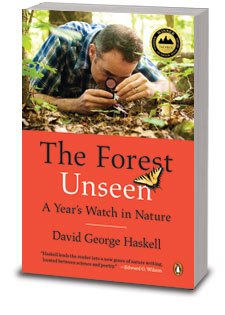 In The Forest Unseen, through forty-five short essays over the course of one year, Haskell adeptly uses a one-square-meter patch of old-growth Tennessee forest as a window onto the entire natural world, even onto human nature itself. He starts, like a well-trained naturalist, by observing wondrous details, and one never feels lost in an impenetrable landscape. Haskell writes about katydids and the music of the forest: “The rhythm holds steady for a minute or more, breaks into a din of unsynchronized songs, then unison is reestablished. The barrage of sound is the acoustic expression of the forest’s great productivity.”

It’s fitting that sound is our transition to Haskell’s new book. As compelling as The Forest Unseen, The Songs of Trees: Stories from Nature’s Great Connectors has received much deserved attention. Haskell’s writing is deeply beautiful and infused with exceptional knowledge. Because of his unique skills as a writer and his knowledge of biology, Haskell makes connections understandable; he creates an ecological web that expresses the complexity and nuance of nature.

The Songs of Trees has three parts, and each chapter title is the name of a tree (or trees). The preface sets out the project of this book; Haskell writes:

Each chapter of this book attends to the song of a particular tree: the physicality of sound, the stories that brought sound into being, and our own bodily, emotional, and intellectual responses. Much of this song dwells under the acoustic surface.

To listen is therefore to touch a stethoscope to the skin of a landscape, to hear what stirs below.

Haskell has an ability to make connections across species where networks of ecological diversity become the focus; for example, this comes from the second chapter, “Balsam Fir”:

[Chickadee] intelligence resides within both individuals and societal relationships. A chickadee therefore lives in a dual world, a self and a network. These birds are just one example of the larger duality within the forest’s nature, one that permeates the biological world and may date back to the origins of life. Chickadee lives echo the stranger world of the balsam fir tree, the forest, and the creative ambiguities of biological networks.

Also in “Balsam Fir,”—a chapter in which you will fall in love anew with the chickadee—the connections Haskell makes help us think about the forest in literate ways, as in this paragraph:

Virginia Woolf wrote that “real life” was the common life, not the “little separate lives which we live as individuals.” Her sketch of this reality included trees and the sky, alongside human sisters and brothers. What we now know of the nature of trees affirms her idea, not as metaphor but as incarnate reality. Like the union of leaf-cutter ants, fungi, and bacteria below the ceibo, a tree’s root/ fungus/ bacteria complex cannot be divided into little separate lives. In the forest, Woolf’s common life is the only life.

Haskell makes all parts of the forest come alive, and he writes in ways that make humans feel part of earth’s vast ecology. He writes about birds and fungus and dirt and trees as if they are all part of the same great web, which is true—they are.

In The Songs of Trees, we travel the globe, listening. To listen, we must learn. Haskell includes contemplative practice in his teaching and writing, and that ability to pay attention—to teach us how not only to see but also to pay attention—is abundant in his writing. In the chapter on “Sabal Palm,” on “a barrier island off the U.S. coast in Georgia,” we hear sand:

The sand on the seaward edge of the dune banked at a sharp angle, running to the beach in one sweep from just below the dune’s peak. Sitting close, I heard this face whisper, a sibilant hesitation, only audible when the seethe of distant wavelets quieted for a few moments. The sounds came from liquefied sand, patches of the slope that suddenly lost their grip and turned, in an instant, to fluid from granular solid. The sand hissed as it raced down the slope in narrow chutes. 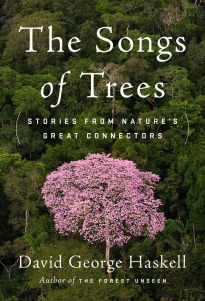 Haskell’s use of language brings to life the organic world he describes. In Part Three, in the chapter on “Cottonwood,” we find ourselves in Denver, Colorado; Haskell writes: “Cottonwood roots also fuse themselves into salt-tolerant fungal networks, tapping the water, nutrients, and defensive chemicals of their partners. Like the ponderosa pine, the aboveground cottonwood shoot is the smallest part of the tree, a flagpole raised by an underground community.”

The Songs of Trees take us to the Amazon, to the East Coast of the United States, to Japan, to Scotland, and elsewhere. Haskell is an astonishing literary nature writer, and The Songs of Trees is poetic and lyrical, engaging our need for images and story while grounding us with facts and science.

12/17/14
Book Review of Jack Nisbet's "The Collector: David Douglas & the Natural History of the Northwest"

2/12/13
Weevils as Biological Control for Knapweed

2/25/12
Thinking About Habitat as Part of Management Plans: A Personal Start